The performances will begin and end at the Boundary Issues exhibition at 942 Pitner Ave, Evanston, IL 60202-1556

description
Utilizing a delivery van mounted with multiple external cameras, images from the surrounding environment are live captured, mixed with pre-existing video and projected onto screens mounted in the side windows of the truck. Sitting in the passenger seat of the truck, the artist  “remixes” the environment in real time, performing a moving intervention into architectural space. The truck follows a looping path through the city and pauses at anchor locations, inviting passengers to interact and have their image mixed into the video. Prerecorded footage of a worker moving boxes, and removing the window grates grounds the project in contemporary consumer systems in which convenience hides the human labor required to pick, package, ship and deliver goods. range thus continues artist Mat Rappaport’s effort to shape the experience of urban environments through media-based interventions. As a co-initiator of V1B3 (www.v1b3.com), and throughout his artistic career, Mr. Rappaport’s work has steadily sought to unearth the historically embedded, psychological and perceptual contingencies of the built environment. As an active, mobile intervention into lived architectural space, range presents its public audience with a shift toward a more enriched, layered experience of public space. 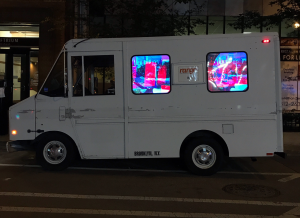 Range Mobile Lab rolled out for its inaugural project. The 1995 step van was retooled with custom projection panels in the side windows, an array of projectors and electronics which allow the truck to power them. While the truck navigated a series blocks in Chicago’s South Loop neighborhood, Mat Rappaport live mixed video captured using cameras mounted to the truck and prerecorded footage of a lone worker moving boxes. Periodically the truck would pause along its route and pedestrians saw their images  remixed into the surface of the windows. This interplay of audience as actor encouraged a series of interactions with the work as well as many selfies.